B (my boyfriend) and I have fallen into the time honored relationship trap: the where do you want to go? I don’t know. What are you hungry for? I don’t know…

This past weekend that dubious conversation arose; both of us too tired to make a decision but both wanted wings and a patio. We live in a neighborhood brimming with wings. Each restaurant in East Atlanta Village has wings on the menu and several fast food spots with choice wings too. But when you live in a poultry paradise, you don’t want to burn out on the obvious options. We got so desperate to not to have to pick a spot that we settled on Taco Mac… faithful readers, I know. Out of all the places in Atlanta, why did we decide to settle on the regional Baron of chain wings? We just talked ourselves out of trying to find a new place or one with a wait or one with tons of Friday traffic surrounding it.

As we hit the road, I get the bright idea for us to (literally) shift gears and go to Augustine’s on Memorial. I hadn’t been in over 2 years and knew they had wings and a patio! It was such a nice departure from what were were planning on having: a blah meal for the sake of eating outside.

My previous trips to Augustine’s have been with guys that I no longer speak to: a former friend who had a dramatic break-up with stand-up and his friends, a former guy I dated, and a tinder match that Augustine’s held the entirety of our interaction. So I had a flash of old memories of men long gone by when we arrived, and then a feeling of gratitude that I’m there with someone who is there for the long haul. The new memory I made at Augustine’s wiped away the dreadful ones of years gone by.

Augustine’s offers two types of wings: traditional and smoked. I let B pick and he chose smoked (I know how to pick ’em!) The came out piping hot and very pretty. Pretty doesn’t sound like the appropriate word but they truly are!

They came out with their house hot sauce on the side along with some blue cheese. 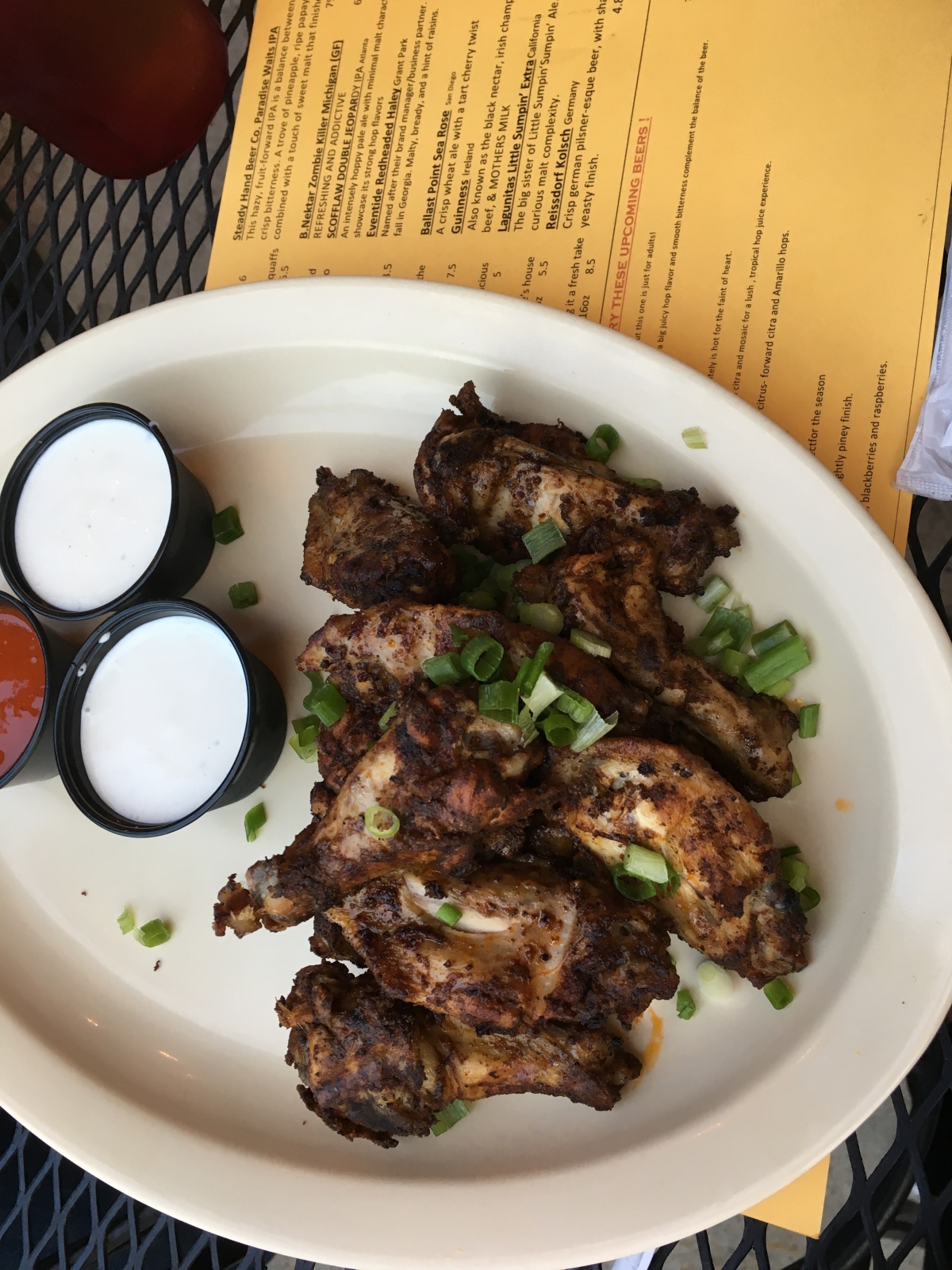 They were fine. They didn’t have that crispiness that other smoked wings around town have. The smoke taste wasn’t as prevalent as my Fox Brother’s favorite smokies or even the Local’s smoked wings.

Side note: I went to the Local for a friend’s birthday on Tuesday and they ran out of smoked wings. I haven’t been that disappointed since I found out since  Luann (of Real Housewives of New York) and Tom (of “It’s about Tom.” and Page 6 fame) filed for divorce.

The tenderness of the chicken outweighed the disappointment of the lack of smoke flavor. I felt less guilty eating those wings than others because it was like I was having a flavorful tender,  grilled wing. Which, I perceive as probably less unhealthy than the fried ones I love so dearly.

After we split those wings, we went in on a hot dog combo. I went for the chili variety. Damn. That hotdog made me want to write a whole ‘nother blog about that frank. The chili on the plump Kosher dog in a warm, toasted poppy seed bun, dripping in yellow mustard  and covered with a blanket of cheese was what weenie dreams are made of. I didn’t even think to take a picture of it.

As I write this, I feel like I cheated on wings. I’m a wing woman… not a weenie woman. I never would pick a dog over a bird wing! But something about that hotdog and the delight of spending a nice evening on the patio with my man was just what the end of summer should be. New memories replacing old ones is even better with a solid hotdog and wings.