After attending Samford, I accepted a job at a multimedia company selling digital and print advertising. It was not a good fit for me but during that time I played on a kickball team that somehow made life bearable. It was one of my favorite things to do. Because Birmingham is so much smaller than Atlanta, the bars were more involved in the league. So big pre- and post- season parties sponsored by the bars in the Lakeview District were full of a lot of beer, a lot of discounted food, and a lot of friends.

I spent many a Thursday night after a game at Innisfree and Moe’s BBQ. 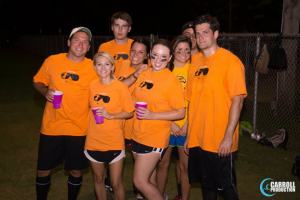 This is one of the seasons I played in Birmingham as the team “Kickas in Paris” (we were dumb). I have shared many orders of wings with these people.

A few of Moe’s BBQ was founded by three guys from Alabama who established their tradition of fruit wood smoked meats in Colorado. By spring of 2009, the moved into a really cool old house in the Lakeview District of Birmingham. In 2011, they took the old Kool Korners Midtown and outfitted it to accommodate their Bama style bar-be-que.

This place makes me so happy when I think about their smoked wings and the times I had eating them with my friends all sweaty and planning new plays for the next game. They will always be one of my favorites.

The wings have super complex smokey flavors all the way to the bone and a barely wet sauce that’s more like a dry rub but not overly dry. I like putting a dab of ranch on my wings and their homemade thick ranch is divine but the wings hold up without any frills.  The wings pair nicely with their fried pickles with that homemade ranch dip or the redneck nachos.

4 out of 5 clucks for meat (so tender and smokey)