This past weekend was one of the most relaxing ones I have had in a long time. Friday night, my comedy buddy Ian and I met up for wings. His husband was out of town and my boyfriend was as well so it was a great excuse for wings and comedy.

We went to World of Beer down the street from the Laughing Skull. I rarely spend time at the restaurants and bars around the Skull and I have been to the usual “cool” sports bars to the left of the entrance like Fado’s, Taco Mac, and ~bleh~ Hudson Grill but rarely go to the right of the Skull. I honestly forgot it was there, I usually come from the other direction so this was a nice change.

Ian and I both got the beer special, Evil Twin’s Femme Fatale Kabosu. A true IPA brewed with Japanese citrus fruit Kabosu which tasted amazing.

One thing I really appreciated about WOB’s food menu was the suggestion of  beer pairings next to the food. So the IPA was a great suggestion for their Medium Buffalo Wings. They came out hot, shiny, and promising. I love a wing’s color being this deep red/orange/brown. 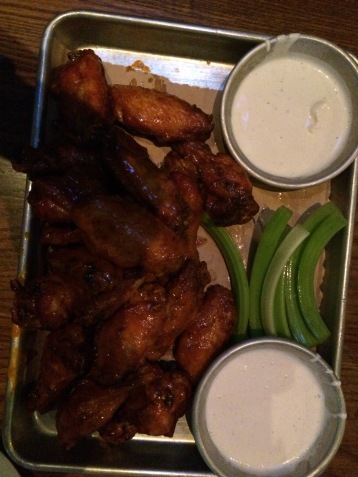 I appreciated the blue cheese cups where wide enough for the width of the wing to be dunked, if need be.

They had a nice flavor and a kick that give the buffalo flavor a nice dimension. The meat was tender but my only draw back was the skin was not very crispy. It would have been a home run if it has a little crunch. Overall, these wings were satisfying and made my dinner with Ian very enjoyable.

We then headed over to the Laughing Skull to catch the late show. Usually when I’m there I’m not sitting in the audience, but Ian suggested it. I’m so gad we did!

Sometimes, as many comics do, we get into routines and only see what we do on stage from a comics perspective. It was so refreshing to be in the audience and watch a show as a spectator. It was a weekend that encouraged me to look at things with a different lens, to come from the other side of the street. I could have missed out on some tasty wings if Ian hadn’t suggested WOB. I could have missed out on some comedy education if we hadn’t sat in the audience. I am terrified of being stuck in my ways and not growing. Us comics do this thing where we tell jokes that we like so much that we can’t stop telling them even if audiences aren’t big fans. I have to remind myself that behavior like that spills over into our personal lives whether its eating wings the same way at the same place or repeating the same behaviors over and over.

It’s time to see and taste things from another perspective before I miss out.